The Artist as Leader: Idan Raichel

I attended a concert of the Idan Raichel Project at the UMASS Fine Arts Center the other night. It was an amazing concert that was enjoyed by the crowd from the first notes until the last encore.

The IRP began when Idan recorded music in his parents basement--inviting an eventual total of 95 musicians from many ethnic backgrounds, musical styles, and languages to contribute to the ever-growing project. The Project's breakthrough single, "Boee," was different than anything on the radio in Israel.  It mixed Amharic, Arabic, Spanish with Hebrew lyrics and brought together musical styles from Africa, Europe, the Middle East, the Caribbean, and Latin America. 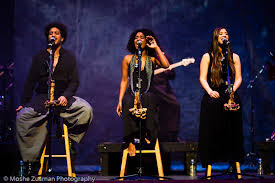 The roots of IRP are evident at the concert:  I had never been to a concert where the headliners did so little headlining.
From the start to the end of the concert, Idan was on the side of the stage (as far from the center as any musician performing with him) with three singers in the middle of the stage.  OK, he wandered a bit but rarely took center stage.  But the three singers pictured on the right were at the center of the group.  This is not accidental.  On the IRP website, it makes clear that this is part of the project's DNA:


"From the beginning, Idan saw the project as a collaboration between artists who each bring their own musical culture and talents to the stage. “There would be no front man,” Idan says. “I would sit at the side and watch things and see what occurs. Every song would have a different singer, we would sit in a half circle and each musician would have a chance to demonstrate what they have to offer" (http://www.idanraichelproject.com/en/)

At a reception following the concert organized by the Jewish Federation of Western Massachusetts, I went up to him to explain how impressed I was with his leadership style.  If I had it with me, I would have shared the famous article by Rabbi Eugene Borowitz entitled “Tzimtzum: A Mystic Model for Contem­porary Leadership.” (This is not an exact link but instead a link to an article in Shma that discusses the 1974 article).  This article discusses a method of leadership that is not about individual power but about the community empowerment: "leaders to exercise restraint of power in order to “make space” for people to emerge in their full humanity."

Today it may not be as unusual as an idea as it was in 1974 but it is still far from the norm (especially in many parts of the Jewish community).  I have never seen as compelling example of this type of leadership as Idan Raichel in his performance (and in the project as a whole).  When I mentioned this to Idan (who recently shaved his well-known dreadlocks), he smiled and said "that is exactly it but I have never thought of it that way."  He may never have thought in terms of Leadership by Tzimtzum but it is obvious that he is a regular practitioner of it:


"This sentiment is reflected in the decision to name the collective The Idan Raichel Project. Says Raichel, “If I had called the album just ‘Idan Raichel,’ people would have thought that Raichel is the main voice on all the songs. I wrote the songs and I arranged and produced them, but I perform them together with other vocalists and musicians. On the other hand, we are not a group. It’s something in between." To date over 95 different singers aged 16 to 91 years old from dozens of different countries and cultural backgrounds haveparticipated in the Project’s recordings or performances.”  (http://www.idanraichelproject.com/en/)

What examples of this type of leadership do you see in your communities?  Does it work?

How can we better bring this type of leadership to our communities?

How can I be this type of leader?

I look forward to your comments and reactions.
Rabbi Bruce